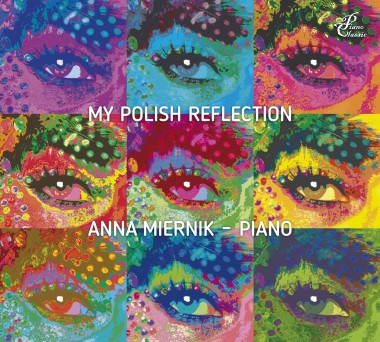 My Polish Reflection – Musical journey through the Polish repertoire

Co-financed by the founds granted by the Ministry of Culture and National Heritage from the Funds for the Promotion of Culture as a part of the programme ‘Muzyczny ślad’, implemented by the Institute of Music and Dance.

Anna Miernik has been promoting Polish music abroad since 2013 and treats it as her artistic mission. Till now she has performed works by 37 Polish composers. Besides playing Polish music during the concerts she came up with the idea to record some of her favourite works. My Polish Reflection presents the pieces of 10 Polish composers from the 19th, 20th and 21st c. Their compositions were written over the period of 185 years, ranging from Chopin’s Variations in B flat major that date back to 1833, to a series of compositions by M. Papara that were created in 2018. The artist hopes that thanks to this ‘musical kaleidoscope’ you will see how varied Polish music is in terms of its imagery, character, colour and tone.

Apart from Chopin there are many other Polish composers from which probably only a few are known – Paderewski, Moniuszko, maybe Szymanowski. The pianist wishes to show that unknown music is only “unknown” meanwhile possesses great value. She believes that it is the same process like with the popular music and new songs – when we listen to it for the first time we can even do not notice it, but then it appears again and again in the radio and we suddenly, unconsciously, start to hum or whistle the piece. It can be the same with classical music and this project wants to convince of it.

In the series of compositions by M. Papara you can hear many sound clusters. Sometimes it was even necessary to use the entire piano keyboard in order to produce them. That was possible thanks to specially designed felt-padded panels that were placed on piano keys, allowing in this way a simultaneous production of all piano sounds. Their exceptional timbre is the crucial and underlying component of this series.